Every car accident victim has asked the question “Why did this happen to me?”. Often, the answer is that another party was negligent in some way and your accident was the result of that negligence.

Distracted driving is the number one cause of car accidents in the United States. Any number of things can pull a driver’s attention away from the road, whether it be talking to another passenger, playing with the radio, applying makeup, eating, drinking, or even just gazing out the window. But it is the responsibility of the driver to not allow these distractions to keep them from driving safely.

NASCAR may make driving at high speeds seem like fun, but the time and distance needed to bring a speeding vehicle to a full stop is much longer than those following the speed limit. The force of the impact when two cars hit is also much greater and can make the risk of injury much higher.

It’s a well-known fact that the consumption of alcohol impairs any person’s ability to speak, move, and make rational decisions. Drunk drivers often believe that if they are “careful” they won’t get caught or cause an accident. But with statistics showing that every two minutes a person is injured in a drunk driving crash, that belief is obviously wrong.

Studies have shown that people who text while driving are 23 times more likely to be involved in a car accident. That is because looking at your phone takes your eyes completely off the road for at least five seconds if not longer. In many cases, the driver isn’t even aware that they are about to cause an accident until they feel the impact themselves. Texting while driving is one of the leading causes of car accidents, which is very frustrating since it is so easily preventable.

Stop signs and lights exist so that the flow of traffic is controlled and drivers crossing paths are kept safe. Drivers who attempt to get ahead by ignoring the signal frequently strike those who have the right of way.

A lapse in judgment or distracted driving can lead a driver to make a turn onto a one-way road – going the wrong direction. The most common type of accident that occurs in wrong way driving is head-on collisions. These types of collisions are one of the most dangerous and cause the most severe injuries.

Like with so many other types of accidents, tailgating usually occurs because the driver in the back is impatient and is trying to get somewhere as quickly as possible. When there are only a few inches between two bumpers it is nearly impossible to stop in time if the lead driver slams on the brakes. Rear-end accidents account for nearly 20% of all accidents on the road, yet they could be so easily prevented.

Street racing, unsafe lane changes, and improper turns are all examples of reckless driving. All flout the rules of the road and all put other drivers in the vicinity in serious danger.

Just as drivers are responsible for behaving in a way that will keep others on the road safe, automobile manufacturers have a responsibility to design, build, and sell motor vehicles that are as safe as possible. But sometimes, there is a defect in the car that can cause an accident.

One of the most notorious defects involved the ignition switch in multiple General Motors vehicles. The switch would suddenly shut off while the car was in use, disabling the power steering, power brakes, and the airbags.

GM has faced both criminal and civil cases as a result and has paid out millions of dollars to those who were injured in their cars, or to families whose loved one died in an accident caused by the faulty switch.

Rain, snow, and ice can all make a driver lose control of their car. While the loss of control isn’t intentional, the person behind the wheel is nonetheless still responsible for the damage that their car causes.

Any one of these examples of negligence can injure others so grievously that their lives are forever changed. The attorneys at Lever & Ecker, PLLC have helped thousands of clients recover after their accident and we can help you.

How Do I Know Who Was At-Fault In My Accident?

New York law might sound confusing to most because the state is considered a “no-fault” state. This means that in order to receive compensation, each driver involved submits their claim to their own insurance company. However, it is still important to determine who was at fault, because in cases of serious injury the state allows victims to file a complaint against the driver who caused the accident. These injuries include:

To prove who caused the accident, it is important that you call the police. When the police arrive at the scene, they will assess the situation, take statements from both parties, and write a police report. This report will indicate who was at-fault for the accident. Request copies of the police report for both your own personal records and the insurance company.

How Can An Attorney Help Me?

Many of our clients believe that insurance will pay for their losses following an accident. In some cases, this is true. However, every insurance policy has limits and injuries don’t stop requiring care if those limits have been reached.

When you and your loved ones find that the medical bills are piling up, you’re unable to return to work, and you are still in pain, it may be time to consult a car accident attorney.

We will investigate the circumstances surrounding your accident, explain every legal option that you have available to you, and answer any questions you might have. If you choose to pursue legal action, you may be able to recover full compensation for your pain and suffering, medical expenses, lost earnings, and emotional distress. Contact us today to learn more. 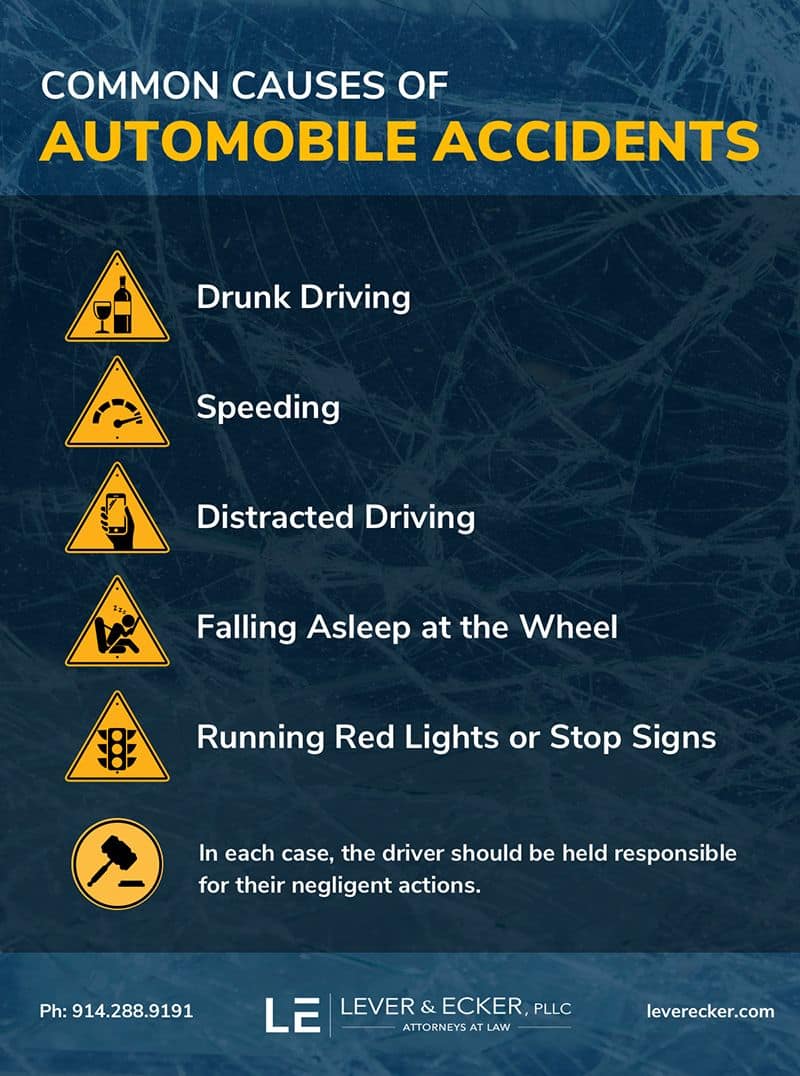 Tragic bus collision involving pedestrian in crosswalk, causing catastrophic injuries which ultimately resulted in pedestrian’s wrongful death two weeks later. Lever & Ecker, PLLC, was able to obtain $12 million in compensation on behalf of the pedestrian’s surviving family. Not only was this settlement (the specific terms of which are confidential) one of the largest personal injury settlements in New York in 2020, we were able to resolve the case at an early stage, allowing the family to obtain a measure of closure and avoid the trauma of reliving the experience in court.